A delight! A three-pound assortment (to use See's-speak) from roughly the same period of time: the night-blooming orchestrations of Faure and Ravel, the more ascetic and less-than melodic styles of Stravinsky and Schoenberg, and the rambunctious showiness of Milhaud.

The Schoenberg piece was so brief that the conductor immediately reprised it because, as he explained from the stage before cranking up the musicians again, he didn't think the audience "got" it the first time. I like that kind of thinking!
Posted by Randy Stark at 12:13 PM No comments: 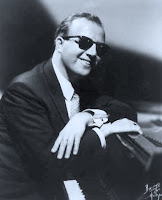 He was a presence in On The Road.
One time at a nightclub he remarked to my mother that she sounded like she had lost weight since they last met.
Posted by Randy Stark at 4:53 PM No comments:

Email ThisBlogThis!Share to TwitterShare to FacebookShare to Pinterest
Labels: George Shearing, On The Road

PAT Nixon, that is, at least on Saturday's Thrilling Live Transmission from the Met in New York City.

Janis Kelly, as Pat Nixon, pretty much stole the show, the highlight being the aria "This is prophetic" which she sang with a combination plaintiveness and defiance that was heart-rending and astonishing. Alice Goodman wrote the libretto.

Leaving Nixon and Kissinger and Mao and Chou to their own celebrity and megalomania, Pat, alone at the Gate of Longevity and Good Will sings of ordinary things. "Why regret/Life which is so much like a dream..." Maternally she sings "Let routine/Dull the edge of mortality." And while the presidents and despots surrounded by their minions plan a high-tech and industrialized future Pat entreats for the common situation, "Let lonely drivers on the road/Pull over for a bite to eat."

For seven relentless minutes alone on the stage, with the bold pathos of a woman from a Greek tragedy, Kelly unfolds one after the other commonplace, seemingly mundane concerns, Whitmanesque in their inclusiveness, juxtaposing kindness to the orchestra playing John Adams' slow, portentous, pulsating, tumbling, minimalist river of a score, expressing good wishes in contrast to the tumult of the world fate has placed her in--- kindness, good wishes, hopes, some quiet, personal observations, making them, in their simplicity, deep and profound, human. The aria concludes in a multi-nuanced call, again echoing Whitman, to "Bless this union...Let it remain inviolate."

A tour de force that, three days later, I still can't get out of my head.

I saw the Thrilling Live Transmission at the Arlington Theater in Santa Barbara, with its faux-outdoor Spanish courtyard motif and stars twinkling in the ceiling.

"Nixon In China"
Music by John Adams
Libretto by Alice Goodman
Posted by Randy Stark at 12:14 PM No comments:

The meteorologist on t.v. said the weather in San Francisco was "Quite mild and getting even milder."

It was so mild, in fact, that where there would otherwise have been thunderous applause for the virtuosic turns--such as Sofiane Sylve and her partner dancing a sure-fire, blow the roof off pas de deux—and neo-classical bombast in Balanchine's best big-cast ballet---Symphony In C, music by Bizet---the audience seemed instead to be staring at a PowerPoint presentation.

Then I realized the world premiere second piece had been so stunning in dance and staging, and had made such ineluctable emotional demands upon the audience, that we had fallen into silent abandon, enjoying the hell out the Balanchine, but emotionally tapped out, physically helpless, unable to respond.

Upon departing the opera house there was a lot more communal chatter than I remember ever hearing, most of it about the second dance, or a huzzah for the entire afternoon.

So you artists out there: be bold!

I had tickets for both days but the ballet was so good on Saturday that I didn't need to go back on Sunday. Instead I stayed in the hotel room, relaxed by pleasant memories, and fulfilled a New Year's resolution to watch as much t.v. as possible, in this case a hockey game, the super bowl, and celebrity bowling. I didn't realize Li'l Wayne was such an accomplished bowler!
Posted by Randy Stark at 12:48 PM No comments:

Ballet is a cult

The conversation at Gino's Sicilian Express comes around to "Black Swan." 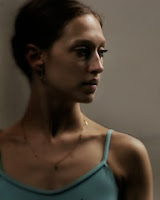 Somebody begins the answer to the question "What's it about?" with "There's this dancing chick..."

San Francisco Ballet has millions of them,
Dancing chicks,
Legs, arms, poses,
Uplift, happy, pretty,
Jete after jete after jete.
Posted by Randy Stark at 7:29 AM No comments: 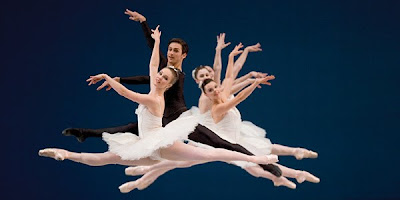 Casting for the performances I'll be attending this weekend appears to be in my favor: plenty of Sarah Van Patten and the "newly discovered" (from the Bolshoi show noted elsewhere) Maria K.
Posted by Randy Stark at 11:40 AM No comments: