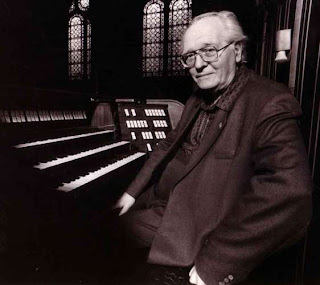 Olivier Messiaen, Eclairs sur l'au-dela (Illuminations of the Beyond)

Friday night I watched the Ades piece from the Disney Hall cafeteria. I knew the Messiaen piece was going to take work and I hadn't had enough wine, so rather than pound the wine as had happened recently to our Seattle correspondent, I drank merrily and watched the proceedings on t.v. It seemed splendid, as has almost every performance this week.

The workers cleaning the dining area in preparation for the intermission crowd paid no attention to the music or the activity on the screen, the beautiful play of trumpet and piano. They knew they didn't have much time because they'd been told it was a short first act. Trash bags rolled out, trays gathered, tables reorganized, tops wiped, chairs replaced.

When I entered the hall just as the intermission was expiring, I was taken aback by the deployment of musicians---there were 130, I was told; seeing them gathered made me think that a lunch wagon would be driving onstage at some point.

I don't understand Messiaen and don't pretend to. Probably more live performances would help; Ades and the orchestra seemed to be grooving. It is spiritual music, and not without its astonishments. The ethereal to close out what opened with the competitive piano concerto. There have been rites and rituals, and everything of a piece all week.