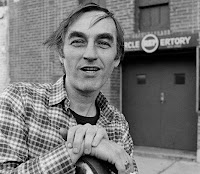 Burn This by Lanford Wilson

Got me thinking there was another death in the arts the week Elizabeth Taylor died: Lanford Wilson. I've seen productions of several of his plays over the years: The Rimers of Eldritch, The Hot l Baltimore, The Mound Builders, Redwood Forest, and Talley and Sons. He wrote a lot of them, he was a workhorse, a craftsman and there was no clowning around about the work, not that there wasn't ribald humor but also a seriousness of tragic purpose, like out of the Tennessee Williams school of tragic purpose.

Coincidentally the Taper was reprising a Wilson play it world premiered (there's that phrase again) 25 years ago, Burn This. A four-character play—with one a great role created—the foul-mouthed brother of the dancer whose accidental death has brought the four characters together. But 25 years has not enhanced the play, in fact except for the tour de force role of the foul-mouthed brother, there's not much here, the characters are struggling to make sense of things that in 25 years the rest of us have moved on from.