Our man in LA 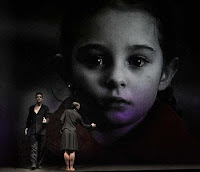 It's all good. They upgrade me to the 10th floor at the hotel in Little Tokyo. My view is the roof and parking lot of a Buddhist Temple. And Nederlands Dans Theater being in town on tour saves me a trip to Nederlands to see them dans, and I would have: they are notorious.

Entering the ballet world is like clearing airport security. Once I'm in their system, I'm in---free to go as I please within the confines of their high flying world, they will take responsibility for me, I'm in their care, their hands and arms, their legs. When it comes time to fly, they'll even pre-board those who need a little extra time. I like being in their bloodstream. With service to incredible.

The Nederlands LA program consisted of two dans, both incidentally capturing the zeitgeist of the city: one piece was set with a motif of the silent movie era, and the other was danced against a cloudy, stormy ominous background.

A storm cell had moved over the sit and then just stood and rotated like a pepper grinder, flooding streets at rush hour, snarling traffic like Elizabeth Taylor's hair in "Who's Afraid of Virginia Woolf" and she had died earlier in the day.

Coincidentally, the first dance was set against a backdrop of storm clouds. There are 24 dancers dressed in business suits. For some reason people in business suits dancing on stage is always a crowd-pleaser. for some reason. Before the curtain rose there was a puppet placed in front, it was of a male dressed in a western business style suit, jokey like the African carvings that caricatured anthropologists and explorers. Turns out to be a bunraku puppet, manipulated via sticks, and there was much use of them in the piece. They were like a cross between human and space alien. At one point a dancer is turned into one of the puppets through a very clever bit of staging where a scrum of dancers has linked arms so that they resemble the sticks that are manipulating the human puppet that is in front of them. It was clever and the point got made early: stages of life, identities, etc, etc.

The jerky dancing, like a Leger painting gone haywire, all that upper body patterning and posturing, the anger and sexual confrontation, seemed to be the coin of the realm in much contemporary choreography. Here there was even less uplift than usual, and the only part that showed fluidity was where dancers march like sleepwalkers in an old school cartoon who are ascending a staircase of steel girders at a high rise construction site, or, for a more contemporary simile, like the video game Mario; otherwise, it was definitely of the earth, earthy.

Three people in silhouette are standing at the entrance to the jetty. Two of the people then walk toward the audience---they are on stage, while the third, in the movie, walks out toward the sea. Well the two on stage start dancing and then other dancers come out and this one's a lot dancier, there's lifting and partnering---again rough-edged de riguer---but different things get projected on the screen and the dancer's relationship to those things is nice. Things rise up from the pit. There was such imagination going on the tingle started along the spine. However, soon the tingle stopped but the piece kept going, and ended with an iris out that encompassed the projection and the dancers.

I'm sure everything here has clips on you tube.