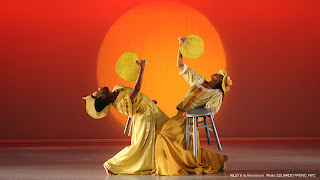 All choreography by Alvin Ailey

The world of Ailey's choreography is a joyful thing of thrill and purity of wonder. I was mightily surprised by how pretty it was (having seen more than a little tuff dance and heard a surfeit of harsh music) costumes and lighting in colors kind of like out of Jacob Lawrence, but I'm only 50 years behind the times, and one performance does not a sweeping declaration validate, yet I understand a little better why the company prospers. Circles of light on the floor or the backdrop, They bring you inside, magic like forts made of blankets and sheets, yet with a very seriousness of purpose; they invite you in for a reason, you roll with them. For the same reason money supports ballet in New York and Chicago and Seattle and San Francisco and Boston, it costs, it's addicting, inside the wave, inside the magic lantern show. I thought PNB's ballerinas had the longest arms, but from where I sat the women at Ailey had long, expressive arms, but then I've only got one eye that works right now, so don't hold me to it. They got us in and out including two intermissions that went by like that in a little over two hours, and we left happy, everything was perfect. Los Angeles' audience reaction was wild, not like some of the people who went harrumphing out of Ades yesterday.