Calling It Like It Isn't: The Fulminating Delirium of Nothingness (Latour)

While searching for an outlet in the airport waiting area, I got to thinking about America’s second favorite topic, the death of culture--the death of books, the death of writing, the death of critical thinking—attributable to wireless technology, the internet, and the mob of methods and devices:  social media, e-mail, i-Tunes, tablets, smartphones, etc.

We, members of the traveling public here at Gate 14, are a representative sample, pecking and tapping and posing and performing in front of our devices, our wireless devices. Because of this some call the USA “a beauty queen democracy,” a “professional wrestling narrative,” an “ideologically vacant dictatorship of likes.”

I thought about the term “wireless.”  It is so easily considered an benevolent adjective insinuating a crusading technology that has “released” us from some stricture, “liberated” us from some burden, “unloosed” us from the shackles of some chain gang of thought, when, in fact, the fetters of “wireless” technology have so bound us in technology we look like mummies.

Thought itself is now under digital control.  That horse is already out of the barn and the door is closed tight.  But wireless synonymous with freedom?  That emperor has no clothes. Sort of the way the word “transparency” has become a crowd-sourced delusion when used by government to imply open proceedings when the fact these days more official documents are considered confidential, more proceedings are held in closed door secrecy, than ever before.  As Bruno Latour writes: “transparency is a special form of darkness.”

Twitter feeds and social media posts in their brevity, so the argument goes, constrict the art of writing, and in their multiplicity, and speed of transmission, and visual imperative, leave only nanoseconds for reflection.  Popups, alerts, interruptions apps, add-ons, questions, updates, LOL, turn this on, turn that off, IMO, do this, click on, enter, do you do you do you. And look at the way we walk, like mummies, seeking outlets to charge our devices.

Naturally, this attracts attention.  Paul Virilio labels it an “occupation,” the immediate and overwhelming onslaught of now. “This occupation places us under surveillance, watching us, scanning us and evaluating us, revealing us and it is increasingly present, increasingly accepted as a fate, a destiny.  Promoting progress means that we are always behind; on high speed internet, on our Facebook profile, on our email in box.  There are always updates to be made; we are the objects of daily masochism and under constant tension.”

The results of that occupation are described by Giorgio Agamben: “banality as a result of lack of history, or self-centeredness, an inculcated sense that you are never wrong, there’s simply a different set of facts, sharing, statements so vague as to be irrefutable, culture, change, sloppy statistics, the system collapsing in on itself, with too much info, decisions made on sloppy stats, what passes for serious thought, intellectual celebrity.”

Mike Kelley talks about the consequences of that loss of historical perspective:  “Perhaps because people have a short attention span, you can get away with illogical developments if you make them unfold over a long period of time.  People will assume that it is logical because they can’t remember what happened before…I would use the same terms, but I’d say something totally in opposition to what had been said half an hour earlier, and nobody would know.”

While I cannot argue with the symptoms, I do not agree that the portents are negative.  In fact, I think it is fair to say the symptoms are, in most cases, welcomed, if not simply disregarded.  “Loss of cultural memory becomes the price of staying perfectly current,” writes Stewart Brand. A price most Americans are happy to pay.

The proof, the smoking gun of this digital nous, and the emperor’s new clothes, can be found in reality television.  Once upon a time, mired in an unenlightened funk, I used to ignorantly argue that reality shows were worthlessly ersatz because they were not “real”:  who really lives with a camera crew in the house and following them around?

But I’m person enough to admit my error.  There are people, plenty of them, who live their lives with 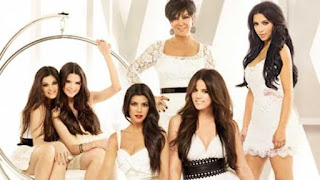 a camera crew around—and crews range from selfie-size (one) to entire production teams. And the popularity of these shows, and the value they add to brand after brand after brand, sets the tone for our culture and the standards for our future, moving beyond good and evil, closer to like two hard clotheslines and a neck breaker.

I mentioned all this to Debra Symmes one afternoon at Anna’s Café.  (And by the way, my compliments to the screening room people.)  Now the whole town is talking about it.