Here are a few notes regarding some great to good literary experiences—a novel in verse, a novel in collage, and two “regular” novels—I’ve had recently, plus a link to my newly added-to Summer Session (which I need to bring to an end here pretty quickly because the wacky academic calendar tells me the “fall” semester begins August 17th).

what is the difference between
poetry and prose you know the old analogies prose
is a house poetry a man in flames running
quite fast through it.

That’s from the book, and the reader gets both the house and the man in flames running. This is the third time I’ve read red doc>, and, just like the first time, just like most of my experiences with Anne Carson writing, much of it sailed over my head—I can’t spoil the plot, but, so virtuoso and enthralling is the writing, that when she’s at her best (in the parts my comparatively illiterate self can understand, that is) Anne Carson is the greatest thing going right now.  I don’t think there is a better writer working.  Prolly because Ms. Carson “teaches ancient Greek for a living” (wacky academic?) there are a million allusions and metaphors that are way scholarly, but the drive of the book, the accessibility isn’t compromised.

I always come away from an encounter with Anne Carson intellectually refreshed and artistically inspired.  In fact, I’m fin to declare Anne Carson Month, maybe in October, and read everything by her I can get my hands on, prose and poetry, immerse myself.  And as another example from red doc>, this is part of a description of a student who became a psychiatrist:

…his teacher at med
school called him a
minotaur who swallows
other people’s labyrinths.
good, I’ll do psychiatry he
said. 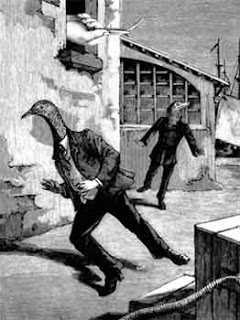 In Seattle in the fecund 1980’s, there was a lot of collage and Xerox street art, posters, flyers, cards and what not, stapled to any wood surface available,usually covering "Post No Bills" warnings, to advertise punk bands, artist openings, poetry readings, etc. This book may have been a stimulus to those creations.

Max Ernst, running with the Dadaist and surrealist crowd from Zurich and Paris in the early part of the 20th century, cut out pictures from old textbooks and catalogues and then arranged them in a narrative collage, divided into “themes and elements” for each day of the week, and called it a novel.  Few of the collages, or mashups to use current argot, make sense and almost all are ridiculously hilarious.

I have a hard copy of the book, and haven’t seen an offer of an ebook anywhere, but the images would look awesome on a tablet screen.  Somewhat sexist and misogynist, reflecting the times and the unfortunate attitude toward women in the art world, Une Semaine seems nonetheless to be a crucial artifact in the surrealist record. 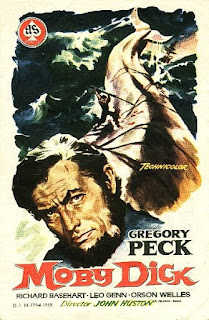 Trace the route of the whaling ship Pequod, departing New England, sailing around the tip of South America and into the Pacific in pursuit of the white whale.and there’s no way to not be fascinated by the intrepidity of the Nantucketeers and their bloody three-year tours aboard the whalers; by the same token, there’s no putting up with, in this day age, all the expository filler in Moby Dick.  If it were just one “thar she blows” after another, bam bam bam, it would be a better read because Melville is excellent at writing about the violent, perilous life and death chases at sea.  With all due respect, I say include primarily scenes involving the Pequod v. whales almost exclusively and cut out the extraneous backstory, eliminate the corny  philosophizing, and discard the Whale Anatomy 101 class reader-style descriptions.  Throw in some Captain Ahab madness, the metaphysics of one deckhand (Pip), and then season with a judicious use of weather verisimilitude, and you’ve got yourself a neoclassic. Otherwise, I’m afraid the book faces eviction from the pantheon. (Melville will, of course, still be represented by Bartleby,the Scrivener.) Right now Moby Dick the novel is too long by half.

And, while I like the following quote, it only takes up space in the novel (maybe someone can publish a separate collection of adages and aphorisms):  “Not seldom in this life, when, on the right side, fortune's favorites sail close by us, we, though all adroop before, catch somewhat of the rushing breeze, and joyfully feel our bagging sails fill out.”

The narrator of the novel is a Russian student who lives with her younger brothers and sisters in an immigrant’s ghetto in Germany.  The action takes place shortly after their mother has been murdered, an act the girl witnessed.  Her goal is two-fold:  avenge the murder, and keep her brothers and sisters together as a unit with the help of an adult relative who came to Frankfurt from Novosibirsk.  The narrator is actually helpless to realize the former, and the latter becomes the substance of the book.

Being 17, the girl, Sascha, (thinks she) knows everything, and she’s got a mouth on her, so the first part of the novel contains some fresh, smart-ass critiques of her (our) world, urban youth, migrants, either disaffected, or affected  differently, taking the world they have been born into, united by music and their internet-based intelligence.

The insight into the struggling immigrant experience—“On the first day of school my classmates stared at me as if I had just climbed out of a UFO.”—be it Russians in Germany or Mexicans in the USA or Japanese in Brazil, is fully depicted.   Unfortunately, the sharp sound and fury at the beginning dissipates; the author turns soft, doesn’t go hard the whole book.  And Broken Glass Park turns into a melodramatic non-page-turner populated along the way by a creepy father and son tagteam lusting after her body, as well as some weepy, gooey reconciliation scenes.

So the jury in my head is still out when it comes to Alina Bronsky.  The potential is there, clearly.  I’ll have to read another book by her to see what the trajectory is becoming.  Plus the name Alina Bronsky is a pseudonym---why?

Well, until next time…