What People Do for Money, by Kandi Kane. 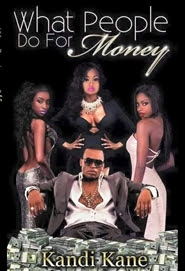 Warning:  although the book begins idyllically—“It was early Saturday morning I was awakened by the birds loud chirping.”—all hell breaks loose quickly, and it becomes a brutal, nasty morality tale—evil vs. really evil—set on the streets of Detroit in a culture of killers, perverts, addicts, dealers, thugs, thieves, pimps and hos, with graphic descriptions of degeneracy, rape, torture, murder, you name it.

Authentic, expressive writing, can be stylized or it can be like “The word on the street travel fast, Smoke and Slick was already on the scene.”  Whatever way, good writing gets in your head.  Even with all the butchery and bloodshed and the lewd and lascivious behavior going on in What People Do For Money, you can’t help enjoy, on a different level, the accuracy of the author’s descriptions:  for example, when the scene is “the Fat nigga Babymama house” you can clearly hear the risible scorn, as well as vividly see it in your mind’s eye.

Kandi Kane provides many examples of vibrant writing to choose from; for instance, replacing “there” with “it”:

·         “When they entered the house it was two guys in the living room playing video games.”

And, finally, the sampling and mixing: “Light bulbs and dollar signs start going off in their heads.” Or, “Money was the root to all this evil that we had been experiencing. We had crossed a road where we couldn't turn back…”

The plot also gets tangled up in itself and all the killing and mayhem—a few more paragraph breaks would help—but  man, this is what the 99c genre for literary entertainment should be—this is the gold standard by which all 99c entertainment literature should be measured—when it comes to the precious use of language.

Email ThisBlogThis!Share to TwitterShare to FacebookShare to Pinterest
Labels: Detroit, Kandi Kane, urban literature, What People Do For Money