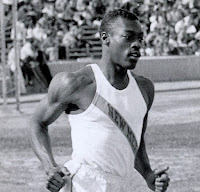 The elegant movie about the eloquent James Baldwin got me thinking about the early 1960’s, I was an impressionable youth in those days who also followed sports. We lived in Albuquerque, and the University of New Mexico at that time had one of the great track teams in the nation. One of the stars on the team was Adolph Plummer. I idolized this great athlete. He competed in individual events and as a member of a relay team. Adolph Plummer set the 440 world record of 44.9 seconds in 1963. He won an NCAA title at that distance a year earlier. I tried out for the junior high track team thinking I was going to be the next Adolph Plummer. He seemed to me elegant and eloquent and fast.

Been trying to jump start Spring, and there are buds and blossoms on the peach tree and the apricot tree, but I proclaim this the coldest and dreariest Winter in several years.

I compiled a paragraph of threads from an online discussion board.

And when I get in that heavy mind, I write things like this:

It was scary as fuck.

Or, when I really stretch:

YESTERDAY WENT LATE AND HARD
.
Not sure what was accomplished.
Scaling the Polymentality
To change the art form
Not just to get more sensitive
Not just tweak the existing
Duct tape on stalagmites
Hospice for fish
Skidding on jazzy rays of bird-blest
Epistemology
From pre classic to post neo late
Which helps make me
The cold blooded creator
The lighter of the harpsichord bonfire
That I am.

But that’s not the tone I like to set.

I’ve been entertaining audiences for more than 50 years.

And the tone I want to set is more like:

Window seat in the parlor car.

A year of crazy changes.

And then, stretching out, one I started, called "At the Deli":

With everything.
Easy oil.

MY PIECE MOVING AROUND THE BOARD

HOW RAD IS THAT

Super cool about it.

IS THERE A WAY