Somebody said 80 percent of writing is reading. Below are brief comments about the most delightful and/or astonishing books and authors that have been part of my 80 percent during the past few months. (And this is in addition to the abundant flow of brilliant writing available on the internet.) This is the best time ever for readers! 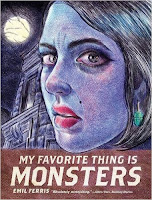 My Favorite Thing is Monsters. A graphic novel by Emil Ferris.  And I loved the graphics but the novel part was overly plotted for my taste, although it didn’t affect my enjoyment of the book, so swept along was I by the graphics. The mood of the piece is pretty grim and dismal but again just looking at the graphics is enthralling. And the discerning reader will value and delight in the art history seminar that runs in the background.

Babette Babich is a philosopher and university professor. She has many books in print and a ton of articles online. I recently read two essays: “Angels, the Space of Time, and Apocalyptic Blindness,”--which the title itself compels reading and as do some of the keywords: “endtime, holocaust, humanity”-- and an article about the excitements and frustrations of starting a philosophy journal—the similarities in the politics of academic philosophy journals and the politics of literary journals are blatant.

Litanies Said Handedly, “scored scourings meant/for the tongue-trigger” are part of a good attempt to recreate on paper the excitement of a Ralph La Charity performance (as I remember them anyway from Seattle back in the day; and this video is a reminder, too). In addition to the performance pieces where “Yes. There is another way to say it” and words “descend in a rush/tripping off the tongue,” The poetics swing and the collages rock. Some other observations can be found in the review I contributed on the book's Amazon page.

Occasional Work and Seven Walks from the Office for Soft Architecture, by Lisa Robertson, is set in Vancouver, Canada, as the 20th century became the 21st and is a exquisite little production all unto itself, modest in its packaging, a geode upon opening, text and images about architecture, space, place; erudite and whimsical and serious (History of scaffolding, or Spatial Synthetics: A theory.) and beautifully expressed in word and design. The Index at the back of the book is hilarious. Like all the others mentioned in this post, there is a lambent mind at work.

“I’m going to dump it all in. Everything that occurs to me or everything I see…This will be my museum. I’ll put it all down here on the page…” A Handmade Museum is a collection of prose poem observation and assemblage by Brenda Coultas of the detritus of the Bowery, objects in trash cans, and dumpsters and vacant lots, archaeological attention paid to discarded items and anthropological attention paid to discarded human beings, as well as odd reflections on all-American oddities, such as “a 60 foot tall Santa that marked the turn-off to Holiday World. Over the summer he was painted into King Kong and rented out to grand openings. If you see either Santa or King Kong, please remember, they are one and the same.” Sometimes her writing reminds me of Gertrude Stein: “He hated to fly, he preferred the ground and traveled by land and not the sea either.” A lovely book.

27Hammerheads Circling Ever Closer, by Catfish McDaris, is so funny and erudite and nasty and violent and crude and poetic and surreal…I made some other observations about the book that can be found in the Amazon review section.

Martha Rosler is an artist and writer, and her essays about art, creativity, and hip urban space are terrific. One essay I read discusses gentrification, the creative class, and the professionalization of art. Another I downloaded is a history of, and aesthetic thoughts about, documentary photography). You can find many of her articles and images of her art work on the internet. Do yourself a favor.

Look, a book of poems by Solmaz Sharif, is about war, the effects of war on human beings, direct, indirect, Iran, Iraq. My favorite in the collection is Reaching Guantanamo, letters from a wife to her husband imprisoned at the U.S. base. (I’m assuming that’s the case; sometimes you really have to spell it out for me.) The letters are censored and the redactions are jarring, and what’s censored, that white space throws an additional light on the words that surround it. I was impressed by the technique, how the poet paced the letters in sequence, and then the contents within each letter, thereby creating it’s own emotional imperative and momentum.

Finally, and continuing in the more somber Memorial Day theme, what I am about to quote informs the life of Joanna Kubicka Fenn but has not circumscribed or inhibited it. To the contrary.: poignant and full  of zest is how I would describe the life chronicled in this wonderfully written memoir, Weaving the Strands of Life. But the passage below is an excerpt from a story from Joanna Kubicka Fenn’s childhood, a memory, hiding in an apartment house laundry room in the city of Lwow in Poland, during World War II as Russian fighter planes were bombing the city. And it speaks to our time.

“It was that laundry room that was used as a bomb shelter. On the outside the windows were covered with sacks filled with sand. Big piles of them. Inside there were wooden benches under the walls. Whenever the alarm sirens went off, everybody went to that cellar. As my mother had this sleeping baby in her arms, and me, people let her have the most comfortable seat—the wooden cover of the toilet. The door to this cubicle was long gone, maybe burned for warmth, who knows, but still it was sheltered from drafts, and I suppose a little safer.

“And then came the night when a bomb hit us...you know I still can hear the long whistle of the bombs…and how it usually ended with a boom, sometimes even with a shaking, when the hit was near…but this time it was different…that night, the whistle became a roar, a boom surpassing all other booms and a quake incomparable to the other quakes. The sand bags must have been blown away from the window, because a powerful blast rushed in. People were flung against the walls, and one lady, who had been standing in the middle at the time, was hurled onto the floor and spun around…just like a toy top…round and round and round…and my mother grabbed me and tried to cover my eyes…but I wouldn’t let her, because it was fascinating to watch…something queer was happening to that spinning lady…she was losing her face…and her arms…she was becoming bloody pulp…right there…in front of us…And then she slowed, and slowed, and stopped , and after all that movement, she was just lying still. I wanted to run to her and tell her it’s all right, she could get up now, but I didn’t, because what was lying there didn’t resemble her at all.”