So Where We At?

PEOPLE ASK HOW’D YOU GET YOUR START?

I tell them I got my start hauling sod out of south Florida.
Never went to school or anything.
I had planned on trying
Hauling seasonal fruit
But my deal at home changed.


SHE WAS DIFFERENT FROM OTHER WOMEN I’VE KNOWN

When I told her I wanted to commit suicide, she’d talk me out of it.

Because it sweet.
But no to sweet.

SUDDENLY I WASN’T GETTING ANY LOADS

17 jaw dropping signs you’re about to puke in your poke bowl.

But she says to me
I am so amazed of this.
This needs settle.
It break my heart.
Needs to be fixed some things.
It give me headache.

RAYING DOWN THE RAW

Your hair’s falling out, your dick only works with other women,
And your Twitter game isn’t that good either.

Point being,
You arl a rooser.

I was like I fucking told you don’t throw that fucking shit at me.
I had just drunken like two cartons of fucking milk.
Darla asked me to have sex with her pregnant girlfriend
Because nobody else would.
That’s all it was, a favor.
She threw it.
I launched.
Not even regular spit, a fucking loogie.
She had that fucking look on her face,
Like did that just fucking happen?

Take care of yourself—you deserve it.
This message has no content.

IF THINGS SLOW DOWN ANYMORE

I’ll just get a flatbed
And go back to hauling lumber and oil field pipe.
I still have all of my flatbed gear.


Please visit my website at www.randystark.com and my page at Write Up The Road.

The blossoms on the apricot tree

Had been told so many times that
They are so cute

Hadn’t lost their baby fat
And the lovesick
Bees were all over them.

You could be an instant winner
But don’t say anything to anybody
Or they’ll send you to another specialist.


Please visit my website at www.randystark.com and my page at Write Up The Road.
Posted by Randy Stark at 4:30 AM No comments:

Test kitchens in the desert.
Jesu Rex with a gravy ladle.
Curry cashew butter to die for.

You’ll be totally down with
The Appetizery at Towne Pointe.
Home of the $3K baked potato.

At our Monday meeting that’s what I’m talking about.
I can have my Earth Day, and eat it, too.
I mean think about what we kill just to keep our pets alive.

But like I say
If something’s working for you
Well then, hey.

Please visit my website at www.randystark.com and my page at Write Up The Road.
Posted by Randy Stark at 4:30 AM No comments:

Isolating and sheltering in place is not an onerous burden on me; writers tend to be that way in any event. But the getting out, the behaving (and misbehaving)—not that I would, but it’s knowing I can’t that gets me all het up.  Can’t go to the café for a coffee and local gossip, can’t go to the tavern for a beer and few laughs, can’t go to the local high school softball game, can’t go to the nearby national park, can’t go bowling, can’t go to the library, and so on and so forth. 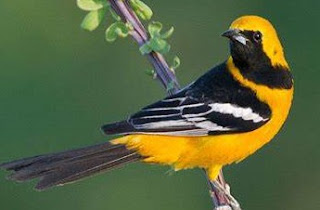 But nothing will take away my mornings. This time of year mornings usually begin with the hooded orioles because I can take care of their needs while I’m still in pajamas and slippers. So I spoon out their daily diet of grape jelly, but if I see they are low on sugar water due to the hummingbirds with their raging thirst stealing it, hummingbirds who also, when the oriole’s jelly liquifies, steal that, too, (this year for some reason the hummingbirds have become right wingers and not very welcoming to our migrant neighbors from Mexico) I have to ramp up production of their special juice—one cup of sugar per four cups of water, bring to a boil for four minutes, let cool.

And if it’s a Sunday morning, I love to listen to Edna Tatum’s Gospel Classics hosted by Gil Fears. (Edna Tatum herself passed away a few years back, but for info about her click here.)

I’m not religious, but this music on this program is awesomely inspiring and uplifting and vibrant. The show airs from 6 a.m. to 8 a.m. Pacific Time. I don’t know if you can listen to it some other way, but here’s the link to the radio station’s player. Thank you Jesus.


Do you remember where you were when you first heard the word quarantine? For me it was October 22, 1962 when President Kennedy spoke about preventing the Soviet Union from placing nuclear weapons in Cuba. The weaponry came in by ship, and Kennedy decided that a “quarantine” of the island nation was the best course of action.

The administration called it a quarantine, because the term "blockade" would symbolize war.

Today there is what Fady Joudah calls “the quarantine on small joys.”

And because I thrive on small joys, I’m a bit off balance. Small joys are a major part of my minimalist livelihood.

Here are some small joys sans quarantine, from Lawrence Durrell:

A bureaucrat: “the endearing solemnity of a talking watermelon just down from Cambridge.”

A group of people: “the disconsolate air of a family of moulting turkeys.”

Pigeons suddenly taking flight: “with the sharp wingflap of a thousand closing books.”

From an airplane: “The slow loops and tangents of the brown river lay directly below, with small craft drifting about upon it like seeds.”

Wearing a bulky, heavy uniform: “It was like being dressed in a boxing glove.”

Late afternoon: “the violet light of dusk was already in the air…gnats rose into the eye of the dying sun in silver streams, so store the last memories of the warmth upon their wings.”

Shop talk: “You thought you would somehow sneak by the penalties without being called upon to do more than demonstrate your skill with words. But words…they are only an Aeolian harp, or a cheap xylophone. Even a sea lion can learn to balance a football on its nose or to play the slide trombone in a circus.”

And from the world of music: Alondra de la Parra

And from the world of art: Deborah Roberts